Although moving to a foreign country to start a new life is bold, it does not necessarily mean that we’re ready to let go of everything we know and instantly become a new version of ourselves. That’s where culture shock comes into the picture.

It’s normal that adapting to a new culture can bring up resistance and frustration, and increasingly more so as time goes on and we learn more about our new country of residence.

Going through the stages of culture shock, we can find ourselves comparing what we are used to from before, or “back home”, to our new surroundings.

But these constant comparisons can get us deeply stuck, making us unable to move backwards or forwards.

But first, let’s talk about why we make comparisons at all.

[RELATED POST] Culture clash: Why being annoyed with a foreign culture is good for you

Moving to live in a foreign country means disconnecting from everything we’re used to and having to start over from a blank canvas. The disorientation experienced from this is precisely what is called culture shock.

The problem is, of course, that people don’t work like SD cards (although wouldn’t that be a nice feature). So we can’t Delete All the files from our memory card and plot in a new culture.

Instead, when we move to a new country we arrive with literal and metaphorical baggage that is very specific to each and every individual.

Now, when I say baggage, I don’t mean that in a negative sense. I mean baggage in the sense that we have different personality traits, skills, values, routines, ways of behaving and thinking as well as coping that we carry with us wherever we go.

All of these things together make up who we are and plays a huge role in how we respond to what life throws at us.

In some aspects we may be more open to adapting due to external factors, while some other aspects can be such a core part of our identity that not even a category 5 hurricane can uproot that part of us.

Culture shock forces us to become hyper aware of ourselves

What moving abroad and adapting to a new culture does to us, especially when it’s our first time, is that it forces us to become extra aware of ourselves.

For instance, living in Portugal made me realize how much I appreciate people being on time.

Living in the UK, New Zealand and Australia made me realize that I prefer people to be straightforward with me.

These are things I discovered about myself by living in countries where things were done differently from how I was used to.

Did I struggle because of the differences? Hell yes.

I felt the absence of these things acutely, although I had no real awareness of their importance to me straight off the bat.

Instead, I found myself reacting negatively to one or another situation. And that was the clue that I was going through culture shock.

The more core something is to how we see ourselves, the life we want to live and have already grown used to, the stronger our reaction when something doesn’t match our expectations.

Living in a foreign country forces us to become aware of everything we like and don’t like, and what this means about who we are as people. Whereas before we may have been able to go through life taking things largely for granted.

Adapting to a new culture and going through culture shock is a very personal process. As personal as going through our closet of old t-shirts, jumpers, some tops, and comfortable-as-hell jeans (do those actually exist though?).

Adapting to life in a new country is precisely the same. Culture shock forces us to take stock of everything that we have and whether it serves us well in the country where we’ve decided to live.

Culture shock invites us to ask whether there is space for something new, how that fits with what we already have, or whether the new is something that really doesn’t fit.

It’s important that we go through culture shock consciously and with curiosity – always trying to become aware of all the things we like and dislike about our new country of residence – and in the process also learn more about ourselves and what’s important to us in life.

It’s precisely this process that makes people say that living abroad changes them. Although, often enough we simply move closer to knowing ourselves better and living accordingly.

So, whenever we start comparing where we live to what we used to take for granted in our lives, we should be paying extra attention to what we’re reacting to and why.

Comparisons give us clues about who we are, and what matters to us as individuals. Maybe these just turn out to be fun facts about ourselves and there really isn’t anything we need to do about it.

But maybe the comparisons that we get stuck in actually give us huge clues about what is missing from our lives and potentially making us unhappy.

Let me know in the comments – what are some of the comparisons you often find yourself making? 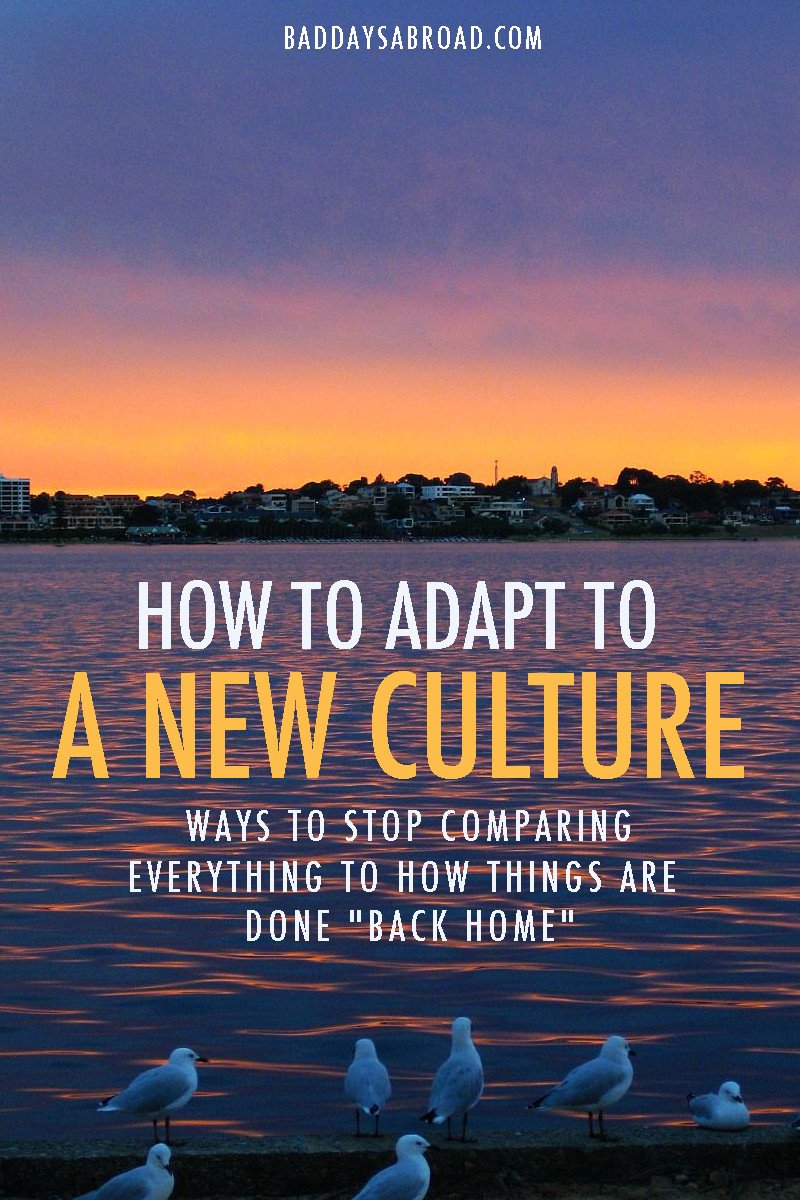 Culture clash: Why being annoyed with a foreign culture can be good for you

I'm Katherine and I created Bad Days Abroad to share my honest truth about living abroad, so you can create a life abroad that feels right for you.

5 reasons why you’re not feeling at home in a foreign country (even after giving yourself enough time to settle in)
Very common reasons why making local friends abroad is difficult
Why you feel like a foreigner in your own country when you visit home
Living abroad alone: What I’ve learned as a serial expat
Culture shock: How to stop comparing and start adapting to a new culture